There were several important lessons to be learned this weekend. The first is never go to a bar in Kansas when you can go to a bar in Missouri. The Second is Cougars are most definitely not Courtney Cox. Finally, the third lesson is being the designated driver is simultaneously the most fun and annoying aspect of partying with friends at bars. 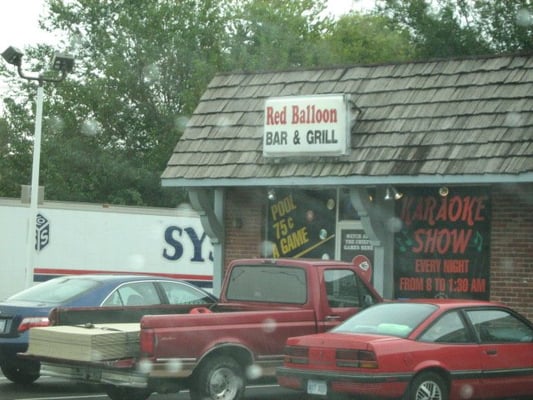 As a general rule of thumb, my friends and I normally do not spend a lot of time at bars. For starters, if you go to a place where you can sleep on the floor, no one has to worry about driving home, and you can usually buy a large bottle of your adult beverage for the same price as one or two drinks at a bar. When we do go to bars, we almost exclusively wind up at one in Westport or the Crossroads district of Kansas City.  Both of those sections of town are on the Missouri side, but more on that in a bit.

This past weekend, though, we were attending the going away party for a friend, and that party was being held at The Red Balloon’s Karaoke Night. So we all piled into my car (I often end up being the designated driver) and headed to Kansas City, Kansas. We were warned in advance that it was a bit of a skank bar, and that we should probably avoid using the rest rooms or touching anything if we didn’t want to catch Bond #7.

When we first got there the bar itself wasn’t super full, but it was already apparent that it was too small for any sort of crowd to gather there and let me still be comfortably separated from everyone else. Long way I may have come, I’m still not ready to deal with insane crowds of random strangers. We should have also heeded the major warning signs of any bar being trouble, which include repaired furniture and a “Cash Only” payment policy.

If a bar doesn’t let you open a tab, you shouldn’t be there.

The next warning sign, and the problem with every bar I’ve been to on the Kansas side was the prices. I have a full on rule that you should never pay more than $5 for a pitcher of cheap beer (and I’m talking PBR) and the cheapest beer at the Red Balloon was $9.50 a pitcher. I think that’s a pretty crazy pricing scheme when their “Top Shelf” drinks are only $6. Another note, top shelf drinks for less than $10 means the bottom shelf is a scary, scary place where “Premium Rum” sits waiting in it’s plastic jug.

For some reason, though, we decided to spend a few hours here.

Enter the Cougars, Exit any form of sex drive I’ll ever Have Again

Let me start off by saying that I am aware of the existence of some amazingly attractive older women. I am not aiming my new anti-cougar policy after you. As a large person, I am also aware that body-appropriate clothing makes a huge impact on whether you look or feel attractive. This is why I am advocating a new rule:

If you are over 40, your skirt should be longer than your underwear.

Trust me when I say, it isn’t going to get you a hot young stud in his mid twenties. What it is going to get you is laughed at by a table of people that spend a great deal of their time honing their ability to insult everyone around them. It will be brutal, and we will not be apologetic.

It does not make it better for you to stand on a stage (thus putting your exposed crotch at eye height) and belt out only the chorus to “We are Family.” Trust me, you are not redeeming yourselves in the eyes of my friends by accidently flashing taco while dancing horribly. We will laugh, we might take pictures, but be assured they are destined for a “People who don’t realize they’re too old for that” tumblr.

The Drive Home, or “How My Friends Made Me Snap.”

As the rivalry between the two cougar packs that were already their began to have a violent steam to them, a party bus pulled up to the Red Balloon with another 40-80 middle aged drunks offloading into the parking lot. We decided it was time for us to get the hell out of Kansas and back to the sane part of the world, Missouri.

Quite a bit of driving was in order before we decided on what we actually wanted to do, and after several unsuccessful attempts to procure a vast quantity of alcohol for our own private consumption, we finally decided to just get some late night vittles at Chubby’s, a fairly well known dinner in Westport. Of course along the way through the city at 1:00 in the morning, my friends, all of whom were somewhat intoxicated, decided to play some loud techno music and dance violently inside the car.

I was worried at one point it would flip over.

By this time, I was getting fairly grumpy from the sheer volume of people I had to spend the evening pretending to ignore, and I finally just snapped at all of them at one point. I regret doing that. In retrospect though, I think this particular explosion actually came from the fact that I had not really had anything to eat since much earlier in the day and I hadn’t actually drank anything at the Red Balloon.

Note to all bars everywhere: You should give Designated Drivers free soft drinks. This will increase your sales on alcohol by quite a bit, since the dd won’t be in as much a hurry to leave, and soda costs you next to nothing when it’s on tap.

The moment we pulled into the parking lot at Chubby’s though, I smelled the bacon, heard my stomach growl and immediately felt a million times better.

All in all, it was a pretty nice end to a pretty nice night. My only regret is having a couple of ladies with us made it feel like it would be a bad idea for Chris and I to get involved in the drunken bar fight that was moments away from erupting when we took our leave of the Red Balloon. I really would like to strike, “Get into a bar fight,” off of the list of awesome things to do in your life.

One last note, in case my evening of terror and skanks didn’t put you off of the Red Balloon, I should share that, according to the aforementioned ladies, the bathrooms there are horrible and if you use them, you probably shouldn’t be surprised if you get herpes. Although if you do go there, be sure to repeat Chris’s wonderful joke, “This place is nice, someone should build 98 more of them.”

11 thoughts on “Welcome to the Skank Bar”

Day 24 – A Song You Want to Play At Your Funeral

Taco Tuesday: The Podcast – Episode 3: We are not funny. Or Informative.