I believe in a great many things. Mock me though you might, and my friends often do, I have a strong belief in a greater being. I believe that the basic understanding of right and wrong moves beyond simple social laws. I believe that we draw strength from the fundamental ideals of the universe, that some force or being greater than ourselves instills in us a higher sense of morality. I believe that, while grey area does exist in many places, that there are things in this world that fall clearly and obviously into the realm of evil. I believe there are forces at work inside the hearts and minds of humanity that seek corrupt us and lead us down a path that ultimately will end in our own destruction.

I believe that evil is easily identified. It is a power created by ignorance, fear and apathy.
I’ve written about honor before. To me it is a binding code of ideas that we can hold onto to protect us from the grip of that which is wrong. It is an abstract idea that can show us a path to doing that which is right. It is so simple in its inception but so amazingly complicated in its execution.

But, it shouldn’t be.

Seven simple rules that we should all be able to follow. Seven little ideas that everyone should know. Seven basic principles that should never be forgotten. Seven virtues that help us to maintain the real, genuine purpose in life.

We exist to help each other become something better.

This evening I read something that made me realize exactly how hard it is to walk the path of honor. In realizing the struggles that I have to keep up my path, it brought forth a sense of urgency in me, it opened my eyes to how incredibly important it is that we strive to bring back those ideals.

I have a friend and fellow blogger named Stereo*. She is an amazing and talented woman whose work usually leaves me questioning my views on the world. She is a wonderful, thought-provoking writer. She also happens to face challenges in her life that I can never truly understand.

She is a woman of Nigerian decent living in London.

Her experiences in life are almost as far removed from mine as you can get, and pretty much the only thing I can say our backgrounds have in common is that we both have ridiculously huge families.

Having grown up as waspy as they come in a predominantly white town, I’ve never been  on the receiving end of any real form of racism. I’ve been around that ignorance and hatred, though, my entire life. From my grandparents struggling to come to terms with society moving beyond 1955 to coworkers insisting that only good homosexual is a dead homosexual, I’ve pretty much spent my entire life holding my tongue about it.

That isn’t the honorable thing to do, though. Silently cursing to myself when I see or hear something that I am morally opposed to is part of the coward that I’m striving to put behind myself. What exactly am I afraid of anyway?

Am I afraid that I’ll offend someone by calling them out on their bullshit? Why should I be afraid to offend a bigot?

Am I afraid they’ll become physically violent with me? I’m larger than most people I’ve met in life and have 12 years of European Martial Arts training under my belt. I let people beat me up for fun.

Am I afraid that I’m breaking some sort of social rule? If so, then that rule should be broken.

Stereo*, my friend, I truly regret that I have not had the courage to stand up. I wish that I could say that I will always have the courage to do so in the future, but I know that would be a lie. I’m going to promise you this, though:

I will strive, with every bit of strength I have to continue to better myself and grow stronger in my convictions. I will pray for the strength to push down my fear, be true to myself and do that which is right. I will push myself to aid those who need it, stand beside those who show their strength, and lend mine to those who need it.

From now on, I promise, I will say with you,

4 thoughts on “It’s Time to Stand Up”

Too Young to Be the Grumpy Old Man 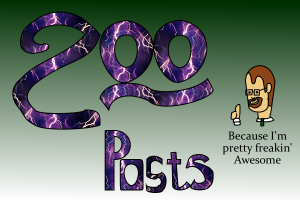