Objectivists: One of a dozen parties founded on the teachings of a drunken writer. Feel familiar?

I see a lot of people making the mistake of asking, “Democrat or Republican?” What if I’m a member of the Green Party,  the Libertarian Party, or the Modern Whig Party? Do I give into social pressure and cave to whichever comes closest to my ideals and philosophy? Most of us probably would, or worse, have never given it any real thought.

There are a lot of political parties in the United States. Any chance we have of being a real democracy (instead of an oligarchical republic) depends on us recognizing that we can and should vote for the ones we agree with the most.

And how do we know that’s the right thing to do? They try to stop us. Love ’em or hate ’em, the Tea-Baggers did exactly what I’m suggesting. They got together as a group with similar political ideas, and started a tea-bagging craze across America. Seriously, they were tea-bagging in the streets. Then, along came the GOP with their cool cars, and ban hammers, and all of a sudden, the tea-bagging fun is all over. Tea-bagging is respectable or polite, you see. Now, they’re Tea Party candidates inside the Republican Party.

The reason the d-bags think they can get away with it is because they have you hooked, and they know it. They’ve managed to convince you that a vote for another candidate is a waste of your vote.

This is important so its going to get big huge letters that are all bold and stuff:

THE ONLY WASTE OF A VOTE

The only time you waste your vote is when you don’t vote.  Never, NEVER, let them take your voice away from you. 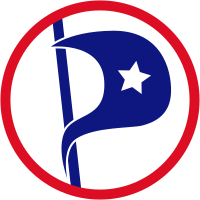 I don’t believe, necessarily, in belonging to one political party. I believe that every vote I cast needs to be in favor of the best result, not who I align with out of convenience or to gain more power.  I study and scrutinize a candidate before backing them. I don’t listen to what they say, so much as what they do.

If I were a member of a political party, though, I’d be a Pirate.