Back in early July, I read a book by W. Bruce Cameron called A Dog’s Purpose. The book, which is simultaneously one of the saddest and most uplifting books I’ve ever read, follows the soul of one dog from life to life in the cycles of canine reincarnation on the eternal quest to figure out exactly why he exists. Unlike the thoughts of reincarnation that people have, Cameron’s canines never forget their former lives, and they continue to learn and evolve through generations, always remember the love and happiness that they have been able to spread.

I think of myself as being a spiritual person. I don’t particularly ascribe to any religion, per se, but I do have a faith in what is beyond the physical world. I don’t worry about if these things are real or not. Believing that they could be is enough to give me a  sense of hope and peace. I don’t need anything beyond that.

I’ve decided that I believe in canine reincarnation, and because I’m 99% sure Abbey was communicating with me through telepathy and not just me making up words to fit her sides of the conversation, I’m pretty sure Abbey did, or rather does, too.

So, when I got home yesterday afternoon after receiving a phone call from my land lord/room mate, it seemed like a logical choice to bury her under the willow tree, which is a symbol for rebirth and reincarnation in his religion.  Also the ground there was soft, unlikely to flood, and we later found out, surprisingly free of even the tiniest rocks.

As we dug, we cracked jokes, exclaimed amazements about how we didn’t have to smash our way through stone to get more than a few inches below ground level, and remembered. The pain of the heart was replaced by the pain of the body as the work carried away sadness. There was just us and the hole. We dug. It only took a couple of hours, and the last big push by Nathan was filled with SAFETY DANCE, which officially made it a digging montage and allowed us to work much more quickly. SAFETY DANCE just works that way, you know.

When the hole was finished, Nathan went to gather his family, and I stood, listening to Mumford and Sons’ Roll Away Your Stone, drank a can of Fruit Punch and smoked a cigarette. I stood and remembered a lot about my time with my girl, like my mind was reconstructing a goodbye montage of it’s own with little clips and memories of her life inside my head.

I remember very clearly the day that Abbey came to me. I was sitting here, at the same desk in the same cubicle I am writing this from, when one of the freight reps came in to check on a business. He happened to mention in casual conversation that he had a dog that he just couldn’t keep out of the pool. She kept getting in stuck, and tearing up the pool liner. He was afraid that if they didn’t find a new home for her soon, he was going to come home one day to find she’d been trapped in the pool a little too long.

I lived alone. I didn’t have any roommates at the time, and my family is spread all across the US. So, there I was, by myself in a 4 bedroom house, and I’ve always been a dog person, so I said I’d take her.

He ran home and got her, and an hour later or so, he came back in with the massively excited 3-year-old Golden Retriever, and a little while later, she went home with me. She wasn’t too happy about being abandoned by her family at first. She didn’t seem to like me, which was pretty hard on me. She took every opportunity to get away, and one night she made a mad dash out the door, and I couldn’t find her. She didn’t come home the next day either, so I went to the dog jail to see if they had her.

Walking through the kennels at Wayside Waifs was rough. All those poor, lonely puppies. I walked past several, and was not in the highest of hopes when I walked around the bend and saw a golden retriever standing there. I hate to say that I didn’t recognize her as quickly as she recognized me. She jumped and clamored, and an hour later, and $50 lighter, we headed home.

That night she slept on my bed for the first time, and from then on… She was my dog, and I was her boy.

It’s no secret that the Abster came to me in a time when I was suffering from pretty heavy depression. She was a major contributing factor to my being able to get through it. She would put her head in my lap or smash her face against my hands to remind me that I was not alone. Ever.

Yesterday wasn’t an easy day for me. Abbey was not the only death close to me yesterday. I lost a co-worker as well.

She was my dog, though.

That’s a term that not too many people understand, I think. My Dog. Not a dog that I owned, but the one that was by my side through my hardest and darkest days. Always loyal. Always loving.

She’d been in pain for the last few weeks. Her health was teeter-tottering between strong and very, very bad.

Her suffering is over now, and I am at peace with it.

I’m always going to miss her, but I’m feeling that it’s okay for her to be gone.

I hope her new life is as filled with love as this one, and that she finds that person that needs her again.

6 thoughts on “The Stones Under the Willow” 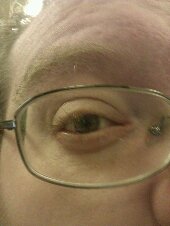 Something Wrong with My Eye

I… am losing my mind.