As I sit here, supposedly working on some busy work that my boss gave me to keep me from becoming bored and dangerous, I can’t help but turn to the internet to preserve what little sanity I have left. So I find myself on twitter, tweeting away with some of my online friends and having a good time, when it happens again.

I kill the internet.

Not in a literal “stabbed it in the eye” kind of way, but in that same way that you can say something at a party causing everyone to stop talking and stare at you like you’re either the devil, or you’ve grown a third head. I can’t see their reactions, so I know that it is entirely inside my head. That means I’m 100% bonkers-crazy.

Most of this problem comes from a very simple place, I have no internal filter, and am a horrible human being. You would think that the simple act of having to type 140 characters, a limit that is FAR more concise than I have ever been verbally, would cause me to put some thought into, “why am I saying this?”

I don’t think it’s a bad thing that I feel this way, though. Over the last decade or so, people have bent over backwards to come up with definitions for emotional problems that don’t exist, or worse, have glossed over the symptoms of real disorders on WebMD and decided for themselves that they have them. They use them as an excuse to not learn or change.

Me, I am accepting the fact that I am a giant tool.

Here’s the thing: I don’t want to be a tool. I want to not trip all over my own words and feel like a dick when I say something that hurts someone’s feelings.

The internet has been a haven for the socially awkward for the last 20 years. That isn’t the case anymore. My grandmother has a Facebook account. She doesn’t use it, and my father actually set it up for her, but she has one. Internet is no longer a cyberhaven for jackholes.

I think what that really means, is that it’s time to grow up, and learn how to not be dicks. The internet gives us the ability to learn these things without the danger of being stabbed with a pencil by a kid named Deke. We should look at social networking sites as training wheels for the real world.

What makes something dickish, is when you say something for absolutely no reason. No meaning.

Seems like the easiest way to avoid being a dick is to not say anything that doesn’t have meaning behind it.

11 thoughts on “Social Anxiety… On the Internet” 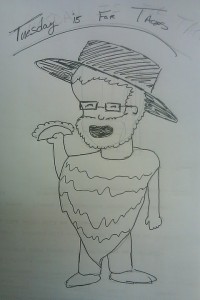 Tuesday is For Tacos #DoodleDay