I spend a lot of time thinking about the future. I probably spend too much time thinking about it, when I should be looking to the present and figuring out how to overcome the small hurdles in the road that we have now. I can’t do that for long, though. My eyes and mind keep getting drawn back to the long haul. I have big picture moments when my mind watches a seemingly small event, a tiny decision and plays out the scenario to its conclusion. This usually means that horrible bad things will eventually come to pass.

I don’t know if that’s a sign that I have something wrong with me, or if it’s more a sign that I think humanity is an incredibly self destructive force. I don’t want to believe the later. I want to believe that with a little bit of work and simple course corrections, sooner or later, we’ll reach that utopia we all desire. A perfect wonderland of the environment and technology. A man made nirvana. I just don’t see that it can ever happen.

It seems that while we’ve been pretending to grow as a society, we’ve secretly been becoming much more selfish and destructive.

When I was running through all of the Reverb11 prompts I’ve gathered this morning, none of them really stood out and screamed, “write about me!” I had to sit down and pour over each one and let my mind absorb it, tug at it and spit something back out. In the end, it came back to the very first one I read today:

My Children Will Do it Differently – If you could choose one thing that your children will do or experience in a different way than you have, what would it be and why?

I know what I want from the future, but I don’t think it’s going to happen in one generation. My own generation, made up of selfish, whiny children that are incapable of learning or evolving, is too good at poisoning our own children for their generation to be any good at anything. I think, though, that growing up with parents as ignorant and self-involved as we are will push them to become something a little different, and maybe their kids will be back on the right track.

I hope that my descendants can live their entire lives without ever giving into the fear that stops them from doing what they know is right.

I hope that my descendants can recognize that they don’t deserve anything just because of where or when they were born, and that they have to earn what they get. I hope they remember that earning it means working for it, not stealing for it.

I hope that they can remember honor, and hold it as a guiding light when they make a decision in their lives, whether it be what to eat for dinner, or the giant political issues of their times.

I hope that when they wake up in the morning, they don’t immediately think about how horrible their day will be, and if today is the day that their government makes that last step towards collapse.

I am hoping that in the future, they take things like education and equality seriously.

I want my kids and grandkids to live in the world that I dream about. It’s a world where people are all truly equal at birth, and get what they get based on how hard the fight for it, metaphorically speaking. I wouldn’t fair well in a gladiatorial world. I want to live in a world where education is at the forefront. Not just the memorization of facts, but a real education that emphasizes learning and understanding. I want my kids to live in a world where they are taught how to learn, and then allowed to absorb everything.

I want the wonderful world of Star Trek The Next Generation.

I don’t think that’s where we’re actually headed, though. The prompt isn’t asking me for my doomsday prophecies, though. Not today! Today I get to decide one thing that they’ll do differently. So I’m deciding on this:

My kids will never back down from a challenge. They will always stand for exactly what they believe in and never be afraid to face the consequences.

Also, they will have laser cannons mounted to their arms. 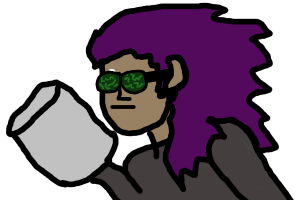 Sorry, I'm still pretty sick, so my doodlin' skills are very much suffering. Still, I promised Stereo that I would try, so here is a doodle of my cyberpunk, arm cannon kids. They have purple hair, because it's the future.

23 thoughts on “The Future is Dark, but I hope that can Change. #Reverb11”