I’m pretty sick of hearing, “… for our children and grandchildren!” Its complete bunk. No one in politics today does anything for anyone but themselves. If you paid $90-200 per ticket to see some assclown speak, he’s only out to rape your wallet. He’s going to do it by preying on your fears and anxieties. He’s going to attack you where you are weak. He’s going after what you love.

I don’t have kids of my own. I probably won’t ever have kids of my own. What I do have, is nieces and nephews. Right now, if I’m to believe the Tea  Party Movement, on the off chance that these kiddos survive a terrorist-muslim-facist-nazi-commie-homo-tranny-liberal president actively trying to kill them and eat their puppies, then there won’t be an economy for them to find jobs in, and they’ll all become heroine-addicted prostitutes.

No, seriously, there’s a conspiracy against your kids. You have to believe me, I wrote it… in chalk.

Chalk makes it TRUE! Glenn Beck tells me so.

Its obvious if you look at the government debt charts that Barrack Obama wants to force you into poverty so you can only afford to eat dog meat, too. Yes, you see: 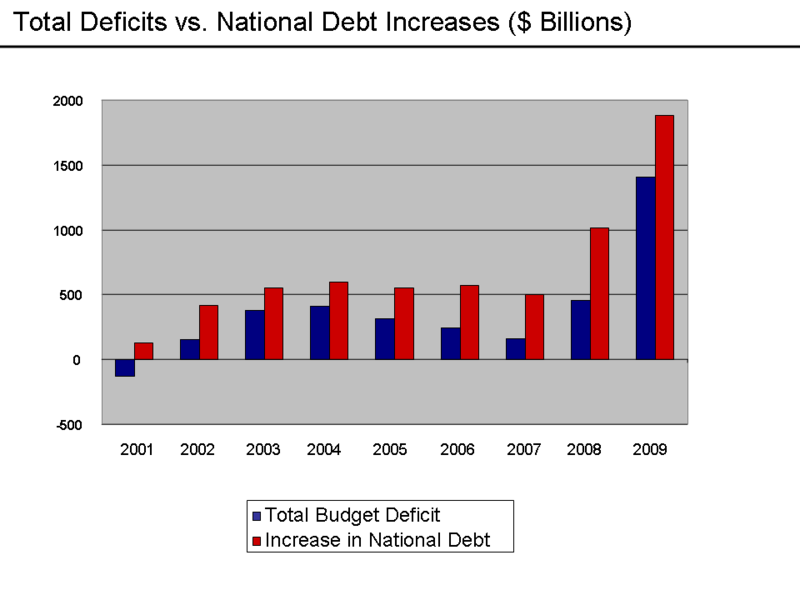 You see, obviously from the chart, the republican business model didn’t take us from the lowest national deficit in the history of our nation to an all time high in a matter of 16 months. No, that would never happen. And surely the $1 trillion cost of the Iraq war had NO effect on our government spending. And we should always completely ignore the fact that George Bush Jr went on television and told us all that if we didn’t push through a ridiculous stimulus package we will all die a horrible nuclear death.

All of those things are Obama’s fault.

In my grandparent’s time, they had their own economy problems. It seems that Herbert Hoover destroyed their economy the same way the tea baggers say Barrack Obama destroyed ours.

The solution was FDR’s New Deal. Jobs were created, lives were saved, swing music was played over loud speakers in the Vatican. It was a total era of capitalism and greed!

Maybe I shouldn’t worry about the kids after all…

One thought on “My Neices and Nephews”