I discovered Brandon Sanderson as a writer when he took over the Wheel of Time Series after Robert Jordan’s death. Part of me went into the most recent books thinking, “There is no way this man could be a writer on par with Jordan, no one is Robert Jordan’s equal!”

I was right, Sanderson is a better writer.

I didn’t have the highest of hopes, but I was put in my place quite quickly. Sanderson’s grasp of the characters was perfect, and his writing style itself is similar in narrative to Jordan’s, but there is a very important difference between the two. Unlike Robert Jordan, Sanderson doesn’t have a love affair with his own words. Where Jordan can fall into a habit of writing several paragraphs of details for no reason other than to have written them, Sanderson puts that same space to work giving you more insight into the characters and the world. Who cares about one blade of grass, when you can give us descriptions of fields.

Being an adamant Jordan fan, though, I couldn’t just accept that Sanderson was some sort of writing god. I had to find his weakness. I convinced myself that his writing might be better, but it didn’t mean anything if he couldn’t create a story on his own. After all, the entirety of my exposure to him was because he had picked up someone else’s work and followed their notes.

That’s why I decided to give his signature series a try. I set into reading Mistborn. Warning, I’m going to try my best to avoid spoilers, but there might be some that crop up. Don’t let that ruin anything for you, though. There is way too much depth to these books for even major plot points to give anything away, really.

So, I’m seven pages into The Final Empire when I stop, look up, and shout, “FUUUU—!”

Everything I had previously wanted to believe about Sanderson was wrong. I had not even finished the prologue and I was already addicted to this book. Which brings me to:

Reason I hate Brandon Sanderson #1: His work is like a powerful opiate, I can’t stop using it.

So, here is a book that by the style of my favorite author, only better, that has characters that I absolutely adore and get angry when bad things happen to them. If that wasn’t enough, it also combines my favorite genre (epic fantasy) with a genre I have never read before (heist), and in doing so, makes me want to read more heist books. It is the perfect result of blending to the two together.

The overall story itself is actually fairly formulaic for the fantasy genre. There is an evil tyrant, and a scrappy group of oppressed people with powers they shouldn’t have need to bring him down. What makes The Final Empire really stand out, though, is that the epic fantasy story is secondary to the rest of it. What is really important is that these characters are learning about who they are, especially the protagonist. It’s as much a coming of age story as it is a fantasy epic or heist. It’s like Sanderson put every teenage geek’s desires into one big book. Including making his hero a socially awkward teenage girl, herself.

He makes you love the characters, and that makes him a dirty bastard, because:

Reason I hate Brandon Sanderson #3: He is a sadistic machine.

You will cry reading this book, and you will realize it’s because of how much you’ve grown to love the characters, and when bad things happen, they happen hard, in a way that is almost too realistic, considering the book is an epic fantasy.

The Well of Ascension

The second book takes the same characters, but pulls them away from the crime drama and into a more political/war themed story. After the events of the first book, they find themselves dealing with the unpleasantries of ruling a kingdom surrounded on all sides by people who want nothing more than to kill them and take what they’ve got. By the time you get into the second book, you actually have so much invested in the characters that you start to feel worried about your own safety. It doesn’t help that some of the current problems in our world are well represented here.

The absolute worst part about all of it, is that Sanderson refuses to allow things like fantasy tradition to get in the way of telling an amazing story. So what if they successfully freed their people, that just means famine, war and disease. It means bigger, darker things coming to get you in the night. The work starts with the end of the first book, and written as a trilogy from the beginning is just hitting its stride at the end of the third book.

I don’t want to give away the ending, but you won’t see it coming easily. Prepare for a pretty good shock, because Sanderson doesn’t pull any punches, and not everyone gets to live happily ever after.

I’m starting on the third book now, and I’m already excited to see where it all leads. Which gives me:

That isn’t something that changes for me very often, and unfortunately for me, I’m discovering his work after he’s already created a large body of it. I’ve got some books to collect and catch up on. I doubt I will be disappointed. 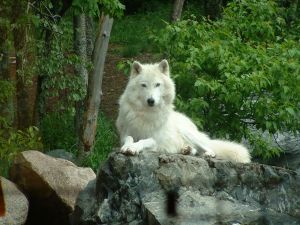