Clouds parted and split in the black sky, allowing a small sliver of silver light to pierce the temple shadows. It slid seamlessly through the great stone pillars. One small beam of Belagal’s blessing crossing through the unending night to land directly at Velik’s feet.

The old caretaker smiled and stepped into it, letting it fill him with warmth. Belagal’s eye could only see those who fulfilled the golden will. It was a small comfort in the face of the primordial treason the four were about to commit. They existed, no, were created to serve. Now, he and the other three were going to violate the most sacred of the primordial decrees.

He pushed open the thin doors to the inner sanctum of Aerta’s temple. The frigid mountain winds poured around him, whistling through the latticework of the great brass screens. He squinted against the blinding wind and ignored the tears frosting at the corners of his eyes and made his way to the altar.

As promised, the chains, forged from both black iron and white magic, hung down from the great domed ceiling. Heavy rings hung on their ends, waiting to be closed. The runes of earth etched into the stone crackled as he approached. The dusty power dug into his skin and caused him to itch deep down inside his soul. He was a servant of the air. He had no business with the power of stone and tree.

“The eternal war must end,” he told himself. “This is the only way.”

He knelt just outside the binding and pulled the heavy robes away from his shoulders. If he was to commit the greatest sin, he would do so skyclad and clean. He would still be the High Priest of Air. That would not change. Now or ever.

The room shook violently as the very stones beneath his feet began to sag and soften. The runes of power etched into them weakened and faded. The life of the stone bled away and only hard weight remained behind.

Velik pushed back the churning in his middle. It was begun. Petra was bound. There was nothing to do now but follow through. His heart rose with triumph. Tormo was now free of this world’s endless agony. His immortality destroyed by his sin.

Through his tears, he smiled. His sin would free him soon enough.

“Velik.” The voice was both whisper and scream as it rolled through the temple. It echoed from every nook, every crevice, and reverberated back across the tall open room to do so again. It roared from deep inside a cyclone of yellow mist spinning and twisting at the altar’s center.

“What have you done?”

The accusation burned into him, tore at his heart and flooded his mind with regret like needles. He squeezed his eyes tight and stepped into the binding. “I’m sorry, my Lady. It is all or none. We must end the war.”

The chains pulled themselves down into the yellow vortex. The white magic mixed with the mists as the black iron circled and tightened. Then, with one last snap, the spinning ended.

Aerta stood on her altar, sadness heavy in her golden eyes. The chains roped around her arms and legs and one large iron ring clamped around her throat. Velik’s breath froze in his chest. The beauty of her face. He never knew.

“Let rest the wind,” he whispered as he dropped to his knees beneath the altar. The etched runes beneath him slid across the floor, rising up each link of iron, each band of magic.

The chains began to tighten. The great titan, the Queen of Air, crushed beneath their enormous weight. More and more they pressed down on her, folding her on herself until she was smaller than Velik and continuing until he could hold her in his hand.

The dangling ends of the chains lurched out, digging into his skin and burrowing into his chest. Time ended. Pain ended. He twisted and bent, but he did not feel it.

Instead, he felt the power.

The power of the winds in the sky.

Locked away forever inside a servant built for one purpose. One reason to have exist.

The winds died inside the temple and the air became stale. A dull layer of thick, heavy dust cascaded down from the ceiling, coating everything in gray powder.

Everything but a single blade lying in a pool of moonlight shining through the open door. Forged from black iron and cloaked in white magic. A soft, yellow glow hummed from inside its mirror polish, slowly fading.

I actually rewrote a fragment of a story I had as the start of a prologue for a book I was going to write several years ago. Take that, doctor who said hording digital files was just as problematic as hording dead cats!

Seriously, though, I was almost tempted to post the original (bits of a) story so you could see the difference, but then I remember that it was really bad and I want you to like me and think I have talent.

Basically, I’m actively trying to trick you the same way I tried tricking girls in high school. I’m hoping this time it is more effective.

Categories
My Stories and Short Stories 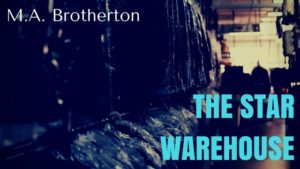 The Man Who Ate Too Many Tacos