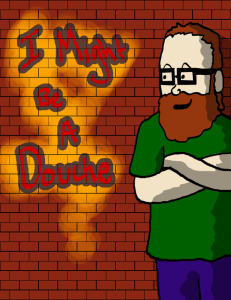 I do my best to avoid preconceived notions. I like to think I was put on this Earth to challenge stereotypes and blind idealism with superior wit, insight and volume. I go out of my way to make people feel like Grade-A Douches when they dare befoul my presence with their bigotry and ignorance. I’ve alienated many a friend over their own blind acceptance of some insane theory about people. I get a warm fuzzy sense of accomplishment when I hear someone admit they were wrong and I was right….

… about their misconceptions… of course.

Despite my hyper-vigilance, though, I am not immune from the dark pitfalls of preconception. Even I, mighty as I am in the preaching of judging the person instead of the people, often fall prey to the pitfalls of predetermination.

I might even be responsible for spreading those beliefs!

Yes. You heard it from me, first:

Many of you probably know that I am a LARP guy. I don’t just play one, I run one. I’m a pretty outspoken member of our community, and have recently been involved in several dozen heated discussions about some of our community politics. For those of you outside the LARP culture, it can be an awful lot like a cross between the cheer-ciety in Bring it On and a hardcore Turf War. On the one hand, w’re usually just catty bitches to one another, but I can definitely see the potential for streets overrun with gore because one group took over another groups practice spot. Trust me, this is an intense hobby.

When I was first learning about LARP, I didn’t know that it was as big a deal as it really is. I had no idea there were other games out there or that those games had thousands of players. I was naïve about how deep the LARP rabbit hole goes.

3 Miles. In case anyone was curious. There, I saved you an entire day face down in that smelly tunnel with paracord tied around your ankles. You’re welcome.

Side Note: Never volunteer for anything… EVER.

I did, finally learn a pretty important rule after some pretty big problems popped up over the years:

Everyone is pretty much cool… when they’re at their own game.

Twelve years ago, I was a much younger and less skeptical person. I was going through the painful emotional growth spurts of the ending teens, and Eldaraenth was my escape and respite. The game was filled with these larger than life personalities and players that seemed like pillars of men towering above me. I felt like I was learning something about honor and dignity from them that I couldn’t get anywhere else. I could ignore their faults. They were examples and role models that I wanted to emulate and become. They weren’t just men, they were Knights! I knew, deep down, I was going to be one of them one day, and I too, would become a strong, immortal and unshakable giant. Nothing would stop me, and nothing would ever defeat them!

Enter a man we shall call, Buttface. Buttface was a pretty cool guy. He meshed well with the giants of men I already knew, and he himself was their equal after years of experience in another game, (we’ll call that game StickJock the LARP). In Stickjock the LARP, Buttface was a high level player and a leader in his community. Then he had moved for work, and there wasn’t a StickJock the LARP group in our area, so he joined us. I pretty much immediately liked him. I looked upon Buttface and decided that I would add him to my pantheon of LARP heroes.

Because Buttface had so much more experience than a lot of our guys, we tended to listen to some of the advice he gave. Everything seemed reasonable. We learned some things and adapted some others. It was all working out exactly the way it should. I couldn’t see how this LARP thing could ever be anything but a positive experience.

One day, Buttface told us that he had met up with some other people around town that had played StickJock and that they were going to try forming a group of their own locally. He asked if we’d be willing to help him out by playing some NPCs1 or if we’d rather, he could help us make StickJock characters. We all figured it would be a great experience, so we agreed whole-heartedly. Now, I have to say, I can understand the appeal of a game like StickJock the LARP, but it isn’t my cup of tea. I think gamers are like that in a lot of ways. My belief is that there is a game out there for everyone, you just don’t know your a gamer until you find it. After helping Buttface out with one event, I could tell that most of the guys from our game felt the same way I did. There was a reason Eldaraenth is our game.

That didn’t stop us from being courtious about Buttface’s game. We shared our practice space with them. We shared event sites. We loaned out players as NPCs. They did the same things for us. It was a great system.

Then one day, I started to notice a pattern. Player’s from Buttface’s game would always show up to our events, but not really participate. When our players went to their events, they got invovled and volunteered with things, but these guys just did a little fighting then sat around ignoring the plot. At first I figured they were just not into our game, and they were here to get in some extra fighting. This happens a lot in the boffer world. Have foam sword, will kick butt. Then I started listening to the things they actually were saying.

“It sucks that your mage can’t wear full plate, in StickJock…”

“One time, at a StickJock event, a billionaire gave everyone in attendance a pony and told us he’d be back again someday.”

It tore our group apart, and came damn close to killing our game forever.

We survived and moved on with our lives and our game, but the damage was done. We were now a game that not only hated StickJock players and everything their game because of one group, we were the guys teaching our new players to truly hate StickJock, its players, and anyone that had ever attended a StickJock event. We were hostile towards them in ways that are still causing problems.

A decade of that lead to me being a pretty elitist LARP bigot. For years I would say things like, “It’s not that I hate StickJock, it’s that the members of StickLandia chapter of StickJock are complete and utter tools with no redeeming traits and the general odor of roadkill.” I was always on the lookout for players that were sent to infiltrate our game and steal our players. I would be an immediate and overwhelming asshole jerk to anyone that I knew came from another game. I’m sure more than a handful of players have been scared off by that. They should have been. Some of the ways we’ve talked about other games might sound an awful lot like we’re about to start rounding up their players to leave swinging from the old hanging tree.

For the last couple of years, though, Eldaraenth has been in a rebound phase of growing and being reborn. A LOT of our players had found other games in the downtime, and as they came home, they brought cool people with them. These people came from a variety of games, some even StickJock. They came in to our game, embraced it whole and loved it. Some of them even stopped playing the other games and started bringing their friends to our events.

We’d regale them with tales of how awesome we are, and we are awesome.  Then, we’d tell them about why we don’t play their game.

“We like to have good role play, so Eldaraenth…”

Now, I know that it isn’t the same thing to toot your own horn during your own events. We just call that teaching new players. It made me realize something, though.

All these years, I’ve felt a grudge to other games for trying to come and steal our players. We don’t go and preach our game at their events (generally. I can’t say none of my players have ever done that, but as a rule of thumb it’s frowned upon in our game and community). We are much more subtle in our ways of assholery. We get their players to recruit for us. We bring one person in and indoctrinate them to game, some might even say brainwash them, then send them back to their home game to bring in the next wave.

We’re the pod-people of the recruitment wars.

Maybe some of their recruiting is defensive?

What I am going to do, is not let it fill me with anger or hate anymore.

In the end, Buttface isn’t a bad guy. He didn’t set out to rip our group apart. He just loved his game.

I could see myself doing the same thing if my game was taken from me and I had to start over with a different game. I’d do my best to share with them why I love LARP and Boffer.

Then, when their backs are turned, I’ll pounce, murdering their king and stealing his crown. Soon, I’d have them in my iron grip building statues to my likeness…