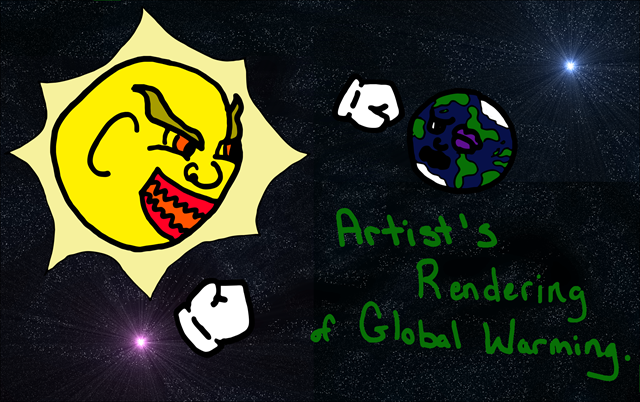 Okay, look, I’m not saying I’m “anti-science.” I’m well aware of the fact that man is responsible for the horrendous climate change that has stopped me from having my glorious, tick-killing winter. What I’m saying is it would be much easier to just kill the Sun.

Look, he deserves it.

The sun is an asshole, and we should really stop treating him with respect.

Seriously, Earth, it’s like you’re an abused spouse that just keeps coming back for more.

Let’s move to a different planet with a less violent sun.

There are blue stars, right?

That’s a thing that exists.

So, if you didn’t know, it was roughly 92°F (or Roughly 33.3°C) today in Kansas City. Today was also April 25. This means that our weather is continuing it’s pattern of being TOO FREAKIN’ HOT! It was in the 60s all winter, and at this rate will be well in to the 120°F range by July. Which is the temperature at which I will literally explode into a thin vapor of death and dismay. For the last 5 years I have been mocking my parents for their quaint little lives in the mountains of Montana, where summer lasts for roughly 56 minutes. Now, I am ready to move north, into the vast wilds of Canada to escape the fact that I suddenly live in the tropical rain forest, minus the life saving tree canopy to block out the deadly Day Ball.

It’s almost enough to make me wish I didn’t have my protective layer of blubber. I mean, it’s a great tactic for fighting off colds and burglars, but in this heat, it’s like I’m melting.

Fortunately I have a magic beard that balances out all the elements.

This is science. You can’t refute me.

Anyway, I’m going off to sit on a pile of ice cubes and eat some orange sherbet.

That’s the only rational and sane thing to do while waiting for the Scientists to come up with a way to kill the Sun.

6 thoughts on “I’m Hot and Sweaty, This isn’t as Sexy as it Sounds”