So, if you’ve noticed lately, I’ve been a big distracted mess. This probably isn’t all that uncommon, really. I’m not exactly a pillar of stable sanity. The last few weeks have been especially hard on me. I think summer usually is. Something about the destructive, repressive heat of the season makes me all nostalgic and depressed… as opposed to winter, which makes me all nostalgic and depressed.

Yes. I’ve been so emo that I’ve turned my Golden Retriever emo.

That’s a super power right there.

I think it’s starting to pass, though because I was able to do some actual work tonight on an actual story that might actually be worth reading.

I actually think I might actually need an actual thesaurus.

It felt good to let my brain flow through a lot of different ideas for a while, but, without committing to any one of those ideas, it’s all moot.

Part of the problem has been, I never really learned out to put together a long term plot. I’ve never felt that my lack of a formal education had hindered me as a writer before, but now, I’m not so sure. The most I’ve ever written has been 3000 or so word scenes, and that was rare. For the last 10-15 years my writing has been limited to use in flash fiction or for role playing games.

Hey, there’s a lot more writing to a good RPG than you realize.

The problem is, that’s always an open ended plot or a scene that has it’s own established context (or a complete lack of context). It doesn’t lend itself well to the development of a writer into longer form fiction. I’ve never written a true short story, let alone a novel. Sure, I completed my 50,000 words in November, and it was a decent enough first draft, but I think any of the handful of you that read it would agree that it wasn’t a novel. I don’t consider it a novel.

To that end, though, I’ve decided that maybe I need a bit more education as a writer.

I can’t afford to take classes (though I’m going to keep an eye on UMKC’s Communiversity [adult education] classes and see if they might have a writer’s workshop coming up sometimes soon), so the best thing I can do is the same thing I’ve done for the last 10 years to learn any new skill, absorb as many books as I possibly can on the subject, as well as a healthy devouring of web pages.

I decided to start tonight with Plotto, which is literally the manual for plot development. It’s formula and it’s 100 years old, but there is solid advice there.

I know that I can write well. I know that I need to write well if I’m going to feel fulfilled and satisfied in my life. I don’t know that I can do that without walking down some roads that others have walked before me and learning from the markers they’ve left on the roadside.

It is simply a matter of doing the work and learning the skill.

I absolutely refuse to put my heart into writing a book, only to find out that I’m just as bad as Christopher Paolini.

If that still comes to pass, I promise you this, Internet, I will do the honorable thing and commit seppuku. I will die with my honor and dignity in tact.

7 thoughts on “Have Notebook – Will Write” 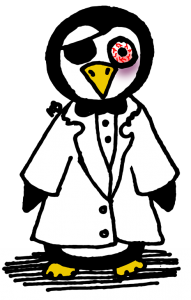 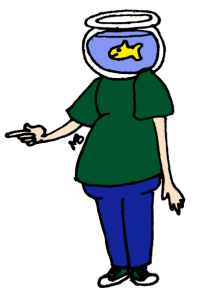 #Doodle It sucks to be a Fish Head