It’s been a bit of a long weekend for me, and since today is the 4th I’m rocking out on my couch with a hardcore snore going on. It was a weekend packed full of awesome times and doing things I never really thought I would enjoy doing.

My friend Chris decided that despite everything he’s known about me for over a decade, that I would enjoy heading downtown to checking out the First Friday at the KC Crossroads district. Basically, what that means is he thought it would be awesome for me to go out into the sun and heat, then walk up and down 20 blocks of the city covered in about 250,000 people, almost all of whom are douches. Somehow he also managed to convince me to do this while wearing suspenders. Actually, in retrospect the suspenders served their function quite well, and looked quite swanky on me to boot.

First Fridays is a monthly street festival in the Crossroads District of Kansas City. It’s basically an excuse for hippies, hipsters, and even some real artists to get together and drink in public. Pretty much everything on 18th street between Holmes and Wyandotte  gets turned into either a gallery or a bar. I don’t know that to be entirely true, since we only went into one place, but it pretty much seemed that way as we walked down 18th street.

When I was a kid, we’d visit my grandparents in Norborne, MO. They used to have a summer festival called the “Soybean Festival.” Pretty much every small town in Missouri has the same basic thing, be it pumpkins, mushrooms, or even just celebrating crazy old dudes. I can say, as we walked around it occurred to me that First Friday is basically the same thing, except at least there was a little carnival at the Soybean Festival.

Appalled that everything was horrible this month, and remembering that it was a complete circus of awesome the month before, Chris decided that we should check out the Pitch and see if maybe we had just missed everything by waiting for the temperature outside to drop below 100 degrees, and low and behold we found nestled in the concerts section a small advertisement for a burlesque show at Press, the upstairs bar in Crosstown Station. I had never been to a burlesque show before, but Chris was pretty familiar with the Burlesque Downtown Underground.

Press is a pretty nice place to see a show. Basically everything is covered in black leather and cushions. The show itself was pretty awesome. It was the perfect mix of raunchy humor, near nudity and amazing vocals that you’d really expect to find with any vaudeville act. Whereas burlesque isn’t really for everyone, I can say, if you are into that scene, than BDU puts on an absolutely amazing show that will have you shouting cat calls and whistling until you don’t really have a voice left.

In the end, I had an amazing time hanging around downtown. Sure, there was a lot of walking around doing nothing, but sometimes, that’s the best way to have a conversation or two. Plus, there was a dude with an awesome bowler and wicked cool goggles. You can never go wrong when steam punk is involved.

One thought on “First Friday at the KC Crossroads” 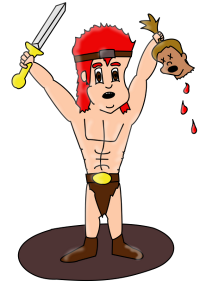 Chivalry in the Age of Equality