It’s raw and unrefined, but here it is. This is really the first piece of fiction I’ve written in years that isn’t somehow related to Larping. Be gentle, I’m easing myself back into the swing of things. 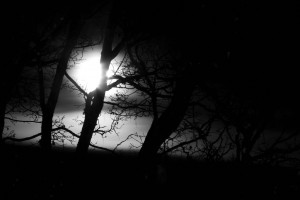 The night was an impending darkness, the wisps of clouds obscuring the last few pieces of light from the late crescent moon, creating maddened shadows that danced between the trees. The wind was steady and cool, twisting through the woods as it pushed against the last remnants of the late autumn leaves. The motion of it all created a daunting tableau against the silence that permeated around him.

He had always considered the night to be his ally, a time when he could be alone in the world. He had lived most of his life with poor sight, and that had left him without a fear for what he couldn’t see. The quiet of it all was what brought that disconcerting anxiety to him. There was no rustle to the leaves as the brushed against one another, no call of insects in the night. The slight glow of everything only added to the uncomfortable feeling building inside him. Complete darkness was something he knew. This, this was something unnatural, and it touched something inside of him, prickling his skin as he walked down the overgrown path.

The reasonable part of him told him to turn around and go back down the path, back to the campfire, tents and people, but something inside him was being pulled on. The feeling inside him was complicated, a longing combined with a dread. There was something down this path that he had lost, something important, and yet, the path itself was terrifying. He took another step, stumbling on into the deeper darkness of the woods.

At least his own steps made sound as he snapped down on the underbrush.

Feeling forward with his hands, he brushed away limbs and vines. The trees seemed to grow thicker, more daunting, with each step, and yet he could feel himself growing closer to whatever it was that was pulling on him. Behind him, the path seemed open and inviting, retreat would be easy, and yet, he knew that if he went back down that road, back to what was easy and inviting, he would never have the courage to push down this path again.

There suddenly came a loud snap to the branches ahead of him, followed by a muffled curse. Pushing farther through the trees, he found a young man, lying in the dirt and undergrowth, holding a broken branch in one hand. This man was younger than himself, and unfamiliar to him. Where had he come from? Was he also being drawn to something down this path? He immediately felt a burst of concern for this kid. Wandering around in the dark on this overgrown path was dangerous. This kid could be hurt pretty bad if he had fallen on something.

“Are you alright? Did you hurt yourself?”

“Just my pride,” the kid said, pulling himself to his feet. Tall, taller than most at least, and broad in the shoulders the kid looked stared at him with dark eyes behind shaggy bangs. The look on his face was confused and angry. He was dirty, and his sunken eyes cast in the failing moonlight looked like the sockets in the face of a skull. His skin was pale, reflecting the glow of the night, and adding to the illusion. Despite the largeness of his body, he seemed as though every muscle had atrophied down to near nothing, and his skin hung loose on his bones.

A sudden fear that this kid was some deranged tweaker hiding in the woods filled him, and he took a stop back. There was something about him, though, something that made him need to help the kid find his way back, out of the woods. Still, he was being pulled on by that overpowering longing, and he couldn’t help himself but continue to glance on down the path, deeper into the night, and farther from what was comfortable.

“You should go back, before you get lost in the woods.” The kids words startled him, sounding loud in the silence of the night despite how quietly he spoke. “There’s nothing down this path but more trees to trip you as you go.”

The words pushed into him. Could this kid read his mind? Did he know what was calling to him in the night? “I… can’t turn around now. It’s… important.”

“The path only gets darker and harder from here. I’m going the other way. You’ve left it pretty trodden down behind you. It would be easier to go back.”

He just nodded and turned away from the kid. Let him go back, that way was easier, but nothing in life worth doing was ever easy. He stepped deeper down the path. Something important was ahead of him on this path, and he would find it, even if he had to wonder in the darkness all night. Determined, he pushed the branches over the path from in front of him, and picked up his pace. There was something important ahead of him. Something that meant everything. He knew it was there. He would have it. 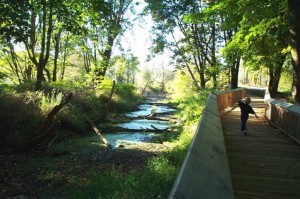 The Most Dangerous Habit – Procrastination