My new room-lord is from Southern Missouri, in a tiny town along he I44 Corridor. I’ve learned from first-hand experience that in the Ozarks, they don’t think much about professional sports, or college sports, or anything that doesn’t involve the eternal struggle between man and rockmonster. That’s okay, their culture is just like that. So, imagine the culture-shock for someone who moves from that area to Kansas City. The intensity that permeates the entire metropolitan area (and I am including Kansas this time, even if they don’t really deserve it) is palpable when it comes to sports, and unfortunately my Room-Lord works directly with the public.

This puts him in a very awkward position. He knows absolutely nothing about sports, professional or college, and yet, he is required by career to interact with locals, and they have certain expectations when it comes to Sportsball games.

These will only last so long before people start to ask him detailed questions he can’t answer.

Then, he’ll be served, slow cooked by wood smoke and slathered in barbecue sauce… served with a side of potato wedges and a corn on the cob.

As an avid member of Kansas City’s Nerdtacular Geek Subculture, I also don’t know a lot about sports. Now, I am a functionally intelligent person born in the KC Metro, so I do know the major sports teams of our area, both professional and college:

Now, if KC was another city, we might ignore things like Soccer and Hockey. A lot of big cities do. They can get away with that, though because they have Football, Baseball, or that other professional sport teams that actually win games. We don’t win things around here in Kansas City unless it’s soccer… or minor league hockey. We’re really good at those.

It’s like someone should put a FREAKIN’ NHL TEAM HERE SO WE CAN BRAG ABOUT BEING GOOD AT SOMETHING OTHER THAN SOCCER!

Still, I don’t follow sports because, well, Professional Sports are Rigged by the leagues to create drama… but that’s for another day.

How to Pretend you Know KC Sportsball Teams!

We’ll start with the easy things to know:

Sporting KC actually wins games sometimes. They play at the “Livestrong Sporting Complex.” That’s in Kansas, and that is Bullshit (Unless you’re on the Kansas side, then it’s awesome).

The Missouri Mavericks will never come up in conversation with 90% of the general public.

If anyone mentions College sports, pick either KU or MU at random and ADAMANTLY SHOUT ABOUT HOW YOUR SIDE IS THE BEST.

If it helps you decide which, KU wears Blue and MU wears Gold.

Pick KU if you want to support a winning team.

Pick MU if you’re not a douche.

*SIDENOTE: KU fans tend to wear less clothing, regardless of gender… if that’s your thing.*

Okay, so now that we’ve covered the very basics, let’s talk about the more advanced strategies.

You already know that you can get away with saying, “Damn” or “We’ll get ‘em next time,” but that is only going to stave off the beast for so long. Eventually, someone will ask you a question. In situations like that, it’s good to have some canned KC Sports answers. This is pretty easy because our professional sports teams suck, and continue to suck in the same way… eternally. It doesn’t matter, though, they’re still awesome and KC, and we love and support them.

The Chiefs are pretty easy to fake interest in. First of all, you only have to know a couple of things:

1) The Chiefs Suck. There is a 90% chance that if you just assume they lost their most recent game, you’ll be correct (Mathematically perfect this year as they are currently sitting at 1-9)

2) The Chiefs go through head coaches like they’re toilet paper. This means you can always just say something like, “Next year will be better, this year is a rebuilding year.”

If you need to know more than this, you can always say something like, “It’s the curse of Gannon, greatest quarterback of all time.” At this piont you will walk away quietly from the ensuing argument. You could also go with something like, “Damn, we need Marty back!” Again, violence might erupt but you should have time to get away first.

Another good strategy is to pick a different team than the Chiefs and claim them as your own. This strategy tends to be believable because KC sucks so bad that no one really wants to claim them. I suggest the New England Patriots. This will make you seem like a semi-loyal fair weather fan. This means that your opinion won’t matter enough to bother with, but that you’re not a wanker.

No matter how bad things get KC fans are ALWAYS loyal to the Royals. You cannot be an exception to this rule. If you don’t know enough about sports to defend  your team choice, you’re only setting yourself up for failure with faking it.

Fortunately, that’s pretty much it when it comes to baseball.

You love the Royals.

For flavor add these two phrases to talks about baseball, “We were doing pretty well there for a while,” and, “Next year we’ll be back on top.”

You literally don’t have to know anything else about baseball to survive as a Royals fan.

Actually, the less you know, the better.

It will only break your heart.

ANOTHER NOTE ABOUT COLLEGE SPORTS:

It doesn’t really matter if you’re KU or MU, but it does matter that you pick one and stick to it like it was sovereign glued to you.

This is like picking a faction in a video game. There is no going back, and there are no replays, man.

Trust me on this one. 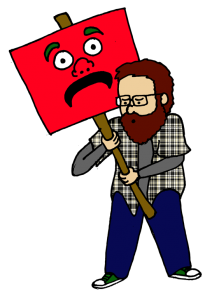 #Doodle The Signs of Sadness