I don’t call what I do “drawing” because I don’t generally concentrate on it. It’s something I do while I’m on the phone with customers or waiting for a section of our billion year old software to load. They are quick, fun little things that keep my hands busy so that I don’t do something crazy, like writing all over the walls with a sharpie.

For the last couple of days, I’ve been finding myself having a lot more time to spend on these things, and I’ve been focused more on actually doing something better. It might also have to do with the fact that I got some notebooks recently from my Lost Crates membership. They deserve to have things put in them. They crave it like a heroine addled monkey. 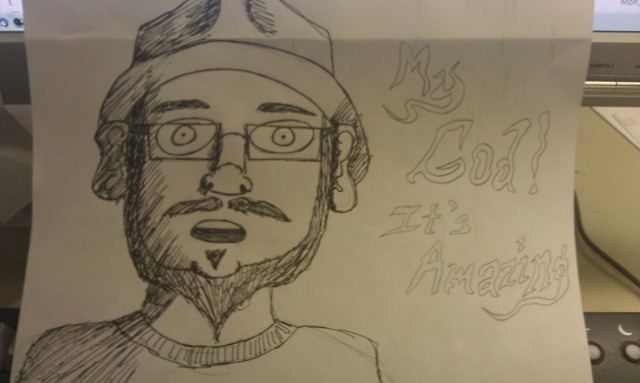 Since I also got a hand on a great pen thanks to Lost Crates, and I love to write and doodle with it, so most of the last week’s drawings have been inks. It’s a different style for me than what I normally do (quick pencil doodles that I color in GIMP), and I find that it completely changes the way that I draw when I’m using it. I’m really enjoying it.

I drew this in my little Dot Grid Cahier from Behance. Actually most of the doodles this week are put in that little journal. I love the paper in this little book, and I think as far as having a little notebook to doodle and write in, I’ve found one of my two favorites.

I did something a little different with this image, I drew it in pencil first, just a quick doodle sketch and then wrote the text over it with my pen. I wanted to have a look like a photoshopped image with highlighted text over the image. I ran over the text with an eraser to to create the cloudy effect and ultimately it didn’t really work out the way I wanted it to, but I’m still pretty happy.

As far as a quick sketch goes, I think it’s a great starting point for something bigger down the line, maybe even something on canvas to hang from my wall.

Again, drawn in my dot grid cahier, which I’ve come to the conclusion today is actually cursed with some sort of emo-kid haunting. The text in my head was meant to be something encouraging and witty, but the image that I drew with it turned it into a self-involved piece of pity me.

The text reads, “We all have a magic Place.” This picture exists because I found some really cheap canvas board at Big Lots and wanted to try out doing something with Sharpies on canvas. I love sharpies, they make me happy. I’m really impressed with some of the cool things I learned about doing sharpies on canvas with this image, too, the primary one being the textures in the ink, which is hard to see in this picture, but makes some really cool effects, especially in the sky.

I used the same basic landscape/silhouette style painting that I do every time I am experimenting with a new technique. It’s a picture that I’m comfortable with and that I think can hang all over my house and still look bad ass. I think it turned out really well, and since I got a 3 pack of my canvases, I might recreate my sword doodle on canvas with sharpie.

I think that would be pretty damned awesome.

3 thoughts on “#DoodleDay – I’m not an Artist, but I play one on the Internet”