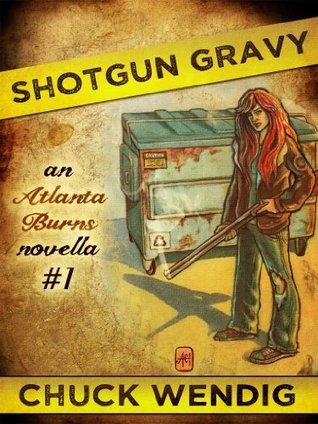 Let’s talk about what a teenager with a shotgun and a grudge is like. Oh, wait, we don’t need to thanks to this wonderful little novella by Chuck Wendig (TerribleMinds.Com).

I don’t really know what I was expecting going into the book. Though I’ve followed the author on twitter for a while now, I hadn’t actually read any of his books, of which there are several. I had a vague idea of how me might write thanks to his work in the World of Darkness books and his tendency to be tongue and cheek on twitter. I knew I wanted to get my hands on something of his to really sink my teeth into, though. He had a certain appeal to him. Probably because he seems like the kind of guy you’d find sitting around a camp fire, drinking after a long day of beating each other with foam swords.

Yep, that kind of guy.

Oh, and Atlanta Burns has a shotgun.

In the first novella of what promises to be a great new series, Atlanta Burns finds herself pulled into the troubles of the weak, the poor, the huddled masses of her High School and their problems. When you have a reputation for being a badass, it can go to your head. The handful of Adderall she just popped probably isn’t helping her decision making either. Now if she can just find a solution to each problem that comes up without bringing down ten more in the process.

My mind likes things to be black and white, and that’s the way it is in Shotgun Gravy. Atlanta Burns does what she wants, and she does it for a reason. Of course, the entire time I was hungrily devouring this short novella, I was thinking to myself, “Chick is a Paladin.” Wendig never really went that far, but considering his background in gaming, I’m sure it wasn’t entirely out of his mind, either.

What you do get is a teenage girl with an attitude and a pretty well defined moral compass, even if she doesn’t know why she’s drawn to follow it. She can’t help herself. She just has to do what’s right, even if it means throwing herself under the bus to save the lives of some scumbags she knows deep down deserve death and worse.

There is a lot of people out there that compare Atlanta Burns to Veronica Mars, and I can see that. Both are teenage girls with single parents that have a dark tragedy in their background and can’t help following their instincts into some serious danger. I’m not entirely sure I would make that comparison beyond that though. If you liked Veronica mars, you’ll probably like Atlanta Burns, but I’d also say if you’re a fan of westerns were the reluctant hero takes on an entire city of corrupt INSERT WESTERN REFERENCE Barons, then you’ll dig this book.

Wendig does seem to have a hard time making the decision between YA and Not-YA, and that’s fine. I think it’s time we get more books that saddle the gap between JK Rowling and Stephen King.

My only regret is that he doesn’t ever quite pull the trigger.

Maybe, in the next book of the series, we’ll see Burns finally blow someone’s head off with her shot gun.

God knows they deserve it.

Pick it up for your Kindle today. 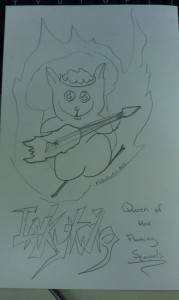