A Tale of Two Books

John Scalzi had an idea. He would take his favorite sci-fi book from childhood (Little Fuzzy) and modernize it for more modern sensibilities. It was a book reboot, and the first one I’d ever heard of. Why shouldn’t he? It happens with beloved characters in comic books and movies. The idea was intriguing to me.

Of course, I have to admit that the reason I chose this particular Scalzi book was because it was narrated by Wil Wheaton, which always works out well for me in the Audio Book picking process.

Jack Holloway and his dog are loaner prospectors. They work a little piece of land miles away from the rest of humanity on the planet of Zara 23. In the course of one afternoon he goes from being fired to the potentially wealthiest prospector in history.

Of course, that’s all before his house becomes overrun with little cat men, who’s possible sentience will revoke the ZaraCrop “Explore and Exploit” Charter for Z23 and leave everyone on the rock broke and miserable.

A book that starts out seeming a little bit like it’s going to run down the path of a classic scifi adventure does a complete 180 and turns into a space aged courtroom drama.

No, I’m not joking, this book is closer related to The Firm than Star Wars.

But, that’s the whole point really. It’s a beautiful wonderful read full of deep legal philosophies that could potentially be closer at hand than they seem.

After all, aren’t there robots working as receptionists in Japan?

How soon will we have to determine their sentience?

Shouldn’t we have some form of precedence in place?

H. Beam Piper’s original book is also brilliant, but it is extremely dated. Where Salzi’s Jack is a former lawyer turned prospector, flying in a jet and talking to his friends on his cellphone, Piper’s Jack is an old cowboy, six-shooter slung to his waist and taking dictations on his reel-to-reel. At least he can call his buddies up on his video phone, built into a nice big CRT Monitor. There are plenty of channels for him to watch as he “develops his movie film.”

Of course, this is in the deep future. After we forget how to make things like VHS tapes.

So, yeah, it needed a little updating, and Scalzi did a good job of making the technology feel more futuristic and evolutional of our own, but he fell short in one way:

Piper’s original book wasn’t about deciding if seemingly monkey like cat-men are intelligent, it was about stopping an evil Corporation from wiping out an obviously intelligent creature from existence for the all might pursuit of money.

Fortunately, Audible included both books in the audio book for one price, and it was great listening to them back to back.

Piper’s generation liked westerns, fought the cold war, mistrusted the man, but trusted the government. The modern world finds young people struggling with their failures as working professionals and being forced to scrape by on the scraps of the demonically wealthy who are supported by their governments.

Piper’s Jack had dozens of supporters.

Salzi’s Jack had only handful of friends.

More than anything, the difference between the two books (besides the laugh ability of what seemed like cutting edge technology 50 years ago) is the feel of the books. This is where Scalzi’s idea for a reboot really shines. He gives us basically the same story, but he doesn’t just modernize the technology and the characters. He modernizes the feel of the universe.

Our world just isn’t the same as it was in 1962. The events in Fuzzy Nation highlight those differences in a very subtle way. ZaraCorp is a megacorp, controlled from the top down by a tyrannical family, instead of an industry built from the ground up with the blood and sweat of the workers. The police, or rather what passes for the police, are a corrupt private security firm barely above the level of hired thug compared to the genial constables of Piper’s works.

Fuzzy Nation is a book about the corruption of government, corporations and the human spirit. It’s a book that lives in the era of the Occupy movement, and it’s about the victory of the little man over an all powerful force.

Little Fuzzy is a book about helping people get what they need. It’s about following the rules and figuring everything out. It’s about family and friends and being able to trust that the government is going to help you in the end.

They might have the same story, but they couldn’t be farther from being the same book.

Pick up Fuzzy Nation or Little Fuzzy from Amazon (Little Fuzzy is Free on the Kindle!), or pick them up as a combo Audio Book From Audible. 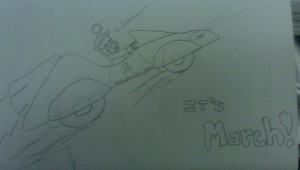