I told you guys this would be book review week. I’ve actually been packing away the pages in an attempt to catch up with my book challenge for the year. It pretty much has left me doing little else, so book reviews is what you’re going to get.

In 50 Years, We’ll all be chicks… and other complaints from an angry Middle-aged white guy by Adam Corolla 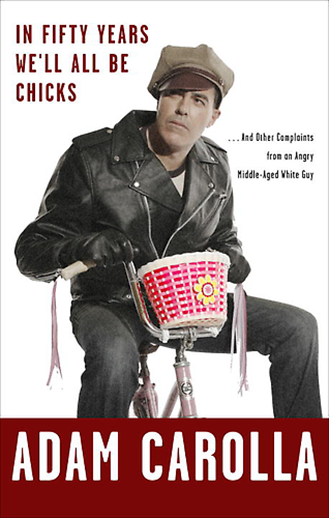 Adam Corolla is a semi-literate asshole. No, that’s what I’ve learned about him from his book In 50 Years. Actually, I’ve learned quite a bit about him, California in the 80s, and my own ideas about from topics as broad as racism and iced tea. Corolla doesn’t shy away from the fact that he’s a chauvinist, or even a misanthrope for that matter. That being said, his hyperbolized way of looking at masculinity, and the threats to it in the modern world, hit the mark with me. Of course, I’m a fan of exaggeration for the point of comedy.

I chose to listen to Corolla’s book instead of reading it because that’s what I do now, I listen to audio books from audible while I drive. It’s relaxing and I don’t accidently run over a bus load of orphans and the Mother Superior that was escorting them anymore. Reading while driving is hard, and that’s my primary me time these days.

I think I made the right choice, too. Corolla narrates his own book, which makes sense considering it’s a book of rants and might as well be one really long episode of his podcast. The added bonus of listening instead of reading, though, is that he goes off script…. frequently. He tends to ramble into asides and bring up new stories that have happened to him since he first wrote the book. It’s like reading a book with author’s commentary. I enjoyed the experience of it. I hope one day I get to read my own book like that. It’ll be fun on the bun.

Of course, if you’re not familiar with Adam Corolla, you should be aware that this is half of the team that created the Manshow, and there isn’t a whole lot in the book that doesn’t go in that direction. He does talk a bit about his experiences being broke and white in North Hollywood and skating through high school without ever really learning to read. He talks about the work that went into making it in Hollywood, and how far he’s really come. All of that autobiographical stuff is there, but mostly it really is one big, long dick joke.

See what I did there?

I considered it a great listen for a person that doesn’t take gender politics too seriously, and can recognize the humor and wit in intense exaggeration and prejudice. If you aren’t that person, avoid it like the plague, because it will offend you, and Corolla just doesn’t care. He points out the ironies of life in everything from cleaning our hands with sanitizer before sticking a ketchup packet in our mouths to bathroom etiquette.

It is a book aimed towards men who still want to revel in the last remaining shreds of our juvenile masculinity, but I think most people with a good sense of humor and the ability to recognize hyperbole and sarcasm would enjoy it. I suggest the read for any guy that is feeling out of place in the modern world. It isn’t a life changing experience, but it does put some things in perspective and reminds you that it’s okay to be a man.

I’m adding it to my list of books to keep on my Man-shelf. It made me laugh about some serious social issues while making me think about them from a different perspective for a change, which is always a good thing.

It might not be a literary masterpiece, but I will re-listen to it, and that makes it good enough for me.

So, if you’re interested, you can pick up a hardbound copy on Amazon, or go with my personal suggestion to listen to it as a audio book from Audible.

#DoodleDay – I’m not an Artist, but I play one on the Internet