Monday was spent helping my parents finish their packing and loading of stuff into our cars, cleaning their Montana house one last time, and heading down the road to Livingston, which is only a couple of hours from Helena, but it is also only about 45 minutes from the Northern Entrance to my second big adventure, and the biggest of the trip by far, Yellowstone National Park.

Just inside the entrance to the park, we pulled over to the 45 Parallel Bridge. I had to snap a photo. My Dad and I were riding in the front seat of my car, so of course, my brother complained that he was still stuck in the northern half of the hemisphere. It was a moment that pretty much set the tone for the day. I was driving, and I called the shots. They didn’t seem to mind, because both of them had been here before.

Early in the morning, I saw some awesome rapids, which I had expected to see up at Glacier, but never really saw. I actually took a lot of pictures. There was a point at the rapids that I had to declare I was spending too much time taking pictures of rapids. The sun was rising very quickly over the mountains, and I had a lot I wanted to see. I hadn’t been ready to accept that there was no way I was going to see everything Yellowstone had to offer in one day, yet, so I was anxious to push on to my first stop, which was the Mammoth Springs on the north side of the park. 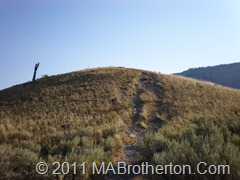 Before we got there, though, we decided to stop and climb to the top of this awesome hill. It didn’t seem as big from the bottom as it really was, but it did seem like it would have a great view. One thing I didn’t account for, well, two things really:

By the time we got to the top of the giant, monstrous hill, I was completely out of breath and my chest burned. It was good, though, because it reminded me of just how far I have come, being able to get up the hill at all, and just how far I had left to go before nothing could stop me from exploring the entire planet… well, except money and international travel laws.

We were rewarded by climbing the hill in other ways, too. Not only were we right about 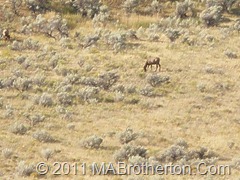 how awesome the view really was, but by climbing to the top of the big hill we were able to see something that we hadn’t seen from the road, a couple of elk laying out in the tall grass. I wasn’t able to get a good picture of it, but up the hill a little way from the two full size elk, there was a little baby elk hiding in the bushes. We could see his head bobbing up and down, but he wasn’t 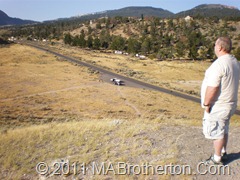 going to let me get a good shot of him, and I didn’t have a good enough zoom to get in on him anyway. The one I did get was awfully blurry.

I decided before heading back down the hill to take a quick picture of my car down below us so everyone could see just how far up that little hill really was. Since all of the ground is the same color, it can be hard to tell the difference, so my dad ended up looking like giant.

We made our way back down the hill, hoping I’d be able to get closer to the elk to get a better picture, but they weren’t having it. Once I started to walk their way, they bolted into the bushes and hid. I can’t blame them I guess. I know I’d get a bit pissed if every tourist wanted to take pictures of me chillin’ on my front yard. 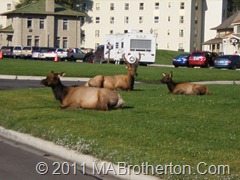 Fortunately, on down the road a little way, we got lucky, and there was whole herd of elk just hanging out on the grass in the middle of one of the ranger towns. They were probably at least a little bit domesticated, because they didn’t mind us getting up close and taking a bunch of pictures. In fact, some of them even seemed to pose for us, and by us, I mean about 100 gawking tourists with cameras, like myself.

Come back tomorrow for the next piece of my amazing Yellowstone Adventures! 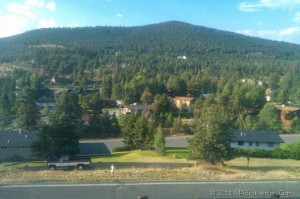 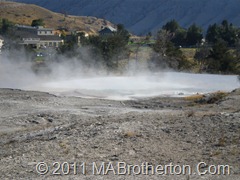